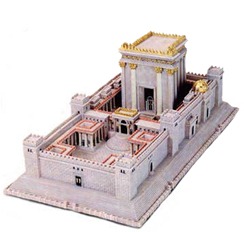 As reported in The Jewish Press on March 14, 2013, there is a new call for something previously unthinkable. Sinem Tezyapar, a Muslim TV producer in Turkey, has called for the rebuilding of the “Prophet Solomon’s” Temple. She assures her fellow Muslims that they need not be nervous because: “There is a broad expanse of land around the Al-Aqsa Mosque and the Dome of the Rock. The land there is quite convenient in that respect, and the Temple can be placed just a little way from Qubbat As-Sakhrah, and a little ahead of Masjid el-Aqsa.”

Well, this is an interesting turn of events. I have posted about the possible “Third Temple” being built at some point in the not so distant future. You can go HERE to read all my posts on this topic, they go quite a way back, as has the push to build the temple. What I find interesting is the mention of location.

Some years ago I had heard about the Temple’s location being not directly where the Dome of the Rock sits, but further North of it. I am going to share with you some excerpts from one of my posts that I think you will find to be quite interesting. I have often asked myself about the verse in Revelation stating that the outer court of the temple (court of gentiles) is not to be measure, why isn’t it measured? Will the be key in understanding how the Third Temple will be built? Anyway, here are some of my thoughts from older posts on it…

Rev 11:2 And cast aside the outside court of the temple, and do not measure it. For it was given to the nations (meaning Gentiles), and they will trample the holy city forty two months.

What I found after looking very closely at this verse is that the outer court or the court of the Gentiles is to be cast aside, and is not to be measured at all. I have read many explanations concerning this un-measured outer court. But here’s the best explanation… this outer court of gentiles could possibly include the Dome of the Rock. Perhaps it is not allowed to be measured because of the outrage by the Islamic community? Perhaps this anti-christ temple will be so inclusive that it will include the Dome of the Rock inside the gentile court; the outer court could be so inclusive that it doesn’t NEED to be measured. These are just questions that I have asking myself of late, and I know that they will be answered in time. Here is one explanation concerning the above verse where it speaks about the outer court/court of the Gentiles and gives us further insight.

The court (tēn aulēn). The uncovered yard outside the house. There were usually two, one between the door and the street, the outer court, the other the inner court surrounded by the buildings (Mar_14:66). This is here the outer court, “which is without the temple” (tēn exōthen tou naou), outside of the sanctuary, but within the hieron where the Gentiles could go (carrying out the imagery of the Jerusalem temple).
Leave without (ekbale exōthen). Literally, “cast without” (second aorist active imperative of ekballō.
Do not measure it (mē autēn metrēsēis). Prohibition with mē and the first aorist active (ingressive) subjunctive of metreō. This outer court is left to its fate. In Herod’s temple the outer court was marked off from the inner by “the middle wall of partition” (to mesoitoichon tou phragmou, Eph_2:15), beyond which a Gentile could not go. In this outer court was a house of prayer for the Gentiles (Mar_11:17), but now John is to cast it out and leave to its fate (given to the Gentiles in another sense) to be profaned by them. Robertsons Word Pictures Commentary.

From my research I came across Prof. Joseph Patrich who has acquired maps dating back to 1866 which places the Temple in such a way that the Dome of the Rock will sit in the outer court. Here are some images: 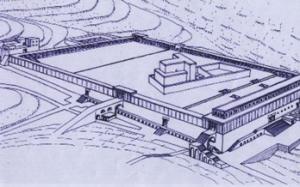 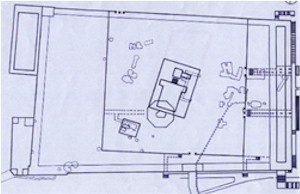 This temple may satisfy the Sanhedrin (time will tell), and the gentile Muslims would still have their Dome. An all inclusive place of worship for Jews, Muslims and for those Kingdom Now Christians who don’t know any better, they will think that the kingdom has arrived with PEACE finally being ushered in between all three major religions.

I emailed Prof. Joseph Patrich and he got back to me and he said the following:

It is outside the temple court, but still within the screen barring gentile entrance.

Dr. Asher Koffman  would place the Temple more than 300 feet north of the Dome on the present location of the Dome of the Spirits (more importantly known as “The Dome of the Tablets”) in a direct line from the present East Gate of Jerusalem, which is constructed upon the Herodian stones of its probable predecessor. If Koffman is correct, or is believed to be correct, it is easily possible to reconstruct a Jewish temple next to the Mosque of Omar with a dividing barrier between the two. This will exactly match the prophecies of Ezekiel 42:20 and would explain the Tribulational Temple of Revelation 11 and the implied Temple of 2 Thessalonians.

This is something to keep an eye on. Keeping in mind that the Temple Mount Institute has most, if not all the Temple vessels ready. I have heard that the they are training the Levitical Priests and that all the masonry for the temple has been made. I have heard that it would only take as little as 6-12 months to build the temple and all of the blueprints have been drawn. It’s just a matter of time when this happens.

Keep your eyes on the Lord people, we are most certainly living in times of the end, where prophecy is being fulfilled at an alarming rate.

11 thoughts on “Possible reasons for Islamic approval of Third Temple.”