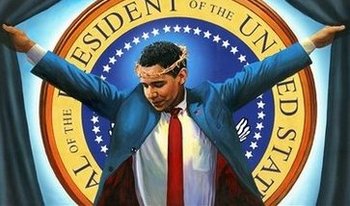 I thought I had heard it all. That was until something turned up in my news feed about ‘Apostle Obama’ and his leading the way towards a ‘Kingdom here on Earth’. Yep, you heard right. Some professor had a vision which prompted her to write a book on this!

The book’s premise is God spoke to Professor Thompson, telling her that Apostle Barack Obama’s 155 speeches made between February 10, 2007 and January 20, 2009 had the answers to unlock the kingdom of “heaven here on earth.”

Yes, Barack had worked tirelessly on behalf of the American people, especially those who elected him in 2008. His followers needed to re-elect him to a second term, so that he could continue to accomplish the promises he made, thus, realizing his vision of America as a more perfect political union or “heaven here on earth.”

Then, as I began to contemplate ways to assist Barack in his 2012 re-election bid something miraculous happened. I felt God’s (His) Spirit beckoning me in my dreams at night. Listening, cautiously, I learned that Jesus walked the earth to create a more civilized society, Martin (Luther King) walked the earth to create a more justified society, but, Apostle Barack, the name he was called in my dreams, would walk the earth to create a more equalized society, for the middle class and working poor. Apostle Barack, the next young leader with a new cause, had been taken to the mountaintop and allowed to see over the other side. He had the answers to unlock the kingdom of “heaven here on earth” for his followers. The answers were repeated – over and over – in speeches Barack had made from his presidential announcement to his inaugural address. Those speeches or his teachings contained the answers to the middle class and working poor people living in a “heaven here on earth.” For when the answers were unlocked and enacted, Apostle Barack’s vision of America would be realized.

Barbara A. Thompson is a native of Tallahassee, Florida, with graduate degrees from Florida A&M University and Florida State University. She has been teaching for more than twenty-five years at the university level with experience in the areas of health, physical education and sport management. She is a professor at Florida A&M University, a former assistant vice president for academic affairs, past president of her university’s chapter of United Faculty of Florida, a graduate of the National Education Association’s Emerging Leader Academy and a two-time recipient of the Who’s Who Among America’s Teachers Award.

The Gospel According to Apostle Barack: In Search of a More Perfect Political Union as Heaven Here on Earth, her first work of nonfiction was inspired solely for the desire and the goal of re-electing Barack Obama, Jr. to a second term as President of the United States. The words contained in this manuscript were extracted from one hundred and fifty-five (155) speeches Barack made between February 10, 2007 and January 20, 2009. It is the intent of the Author to offer this manuscript as a guide to the President’s followers in their formulation of re-election focus groups based on the percepts espoused herein. Further, it is the intent of the Author to utilize the materials contained in the speeches as a means of teaching Apostle Barack’s followers about him and guiding them towards understanding “politics as religion” and “religion as politics” The manuscript would also serve as a guide for his followers – to unlock the answers – to creating and living in the reality of a middle class lifestyle that was so economically and ethically sound that it appeared to be “heaven here on earth.” Barbara, a newcomer to politics, enjoys writing in her leisure. She has been married to her husband, Willie for over thirty years. The Thompsons have one adult son, Gibran.

“Well, once you read the title you can guess how bad the book is going to be. ” Booker T. Reader  |  4 reviewers made a similar statement

““Beware of false prophets who come disguised as harmless sheep but are really vicious wolves.” ” KthomasVA  |  1 reviewer made a similar statement

“You sir (Obama), are no Jesus, or an apostle of Jesus. ” Joseph  |  1 reviewer made a similar statement

You can find out more about it HERE.

But this just goes to show that the Western world is ready for some kind of political Messiah, and yes, I am including the lukewarm church in this. If you think about it, this is not too different to how Germany felt about Hitler in pre-nazi Germany. And if you think about it a little further, if the Western world is ready for a political messiah, and that messiah is the antithesis of the real Messiah, it pretty much sums up the anti-christ spirit. Pro abortion and partial abortion too, same sex marriage, a so called christian president who says he stands for these things??? C’mon! Can light share anything with darkness? AND think about the other world politcal leaders that actually endorse this man, Putin, Charez and Castro. Says a LOT about his policies doesn’t it? Also, think about Obama’s stand on Israel, watch him very carefully over the next four years.

Now I am not a fan at all of ANY worldly system, and I think that there is good reason to separate Church from State. Yet we, in the democratic west have the freedom to vote. What kind of leaders was America given to choose from? A Mormon who believes that Jesus is the spiritual brother of satan, and a so called ‘christian’ who agrees with the death of innocent blood and that the sanctity of marriage can be messed with! America your choices reflect that you get the leaders you deserve. This has happened in other western democracies too, just look at Europe! America will share the same fate. Australia will soon follow. The church in the West is being judged and the true Church is recognising this. That is a good thing. But it will mean persecution. Are you ready for that?

I want to share with you a poem written by a good friend of mine, Lorrie. It speaks volumes…

The grace of God is turning away from the gentiles, it will turn towards Israel and the Jews. We will witness that.  The new move of the Holy Spirit will be towards house Churches! As the first Church began, so will the last days Church end.  The Church will end the way it began. Homes, house to house we shall meet. The true Church will be forced out of the organised church, the same way they were forced out of the temple in the early Church. That is happening. The gentile age is ending. Watch Isreal, and the Jews. It’s time to repent, to look up for our redemption draw nigh!

Here is a MUST listen to interview with Jacob Prasch on the ramifications of recent election events.